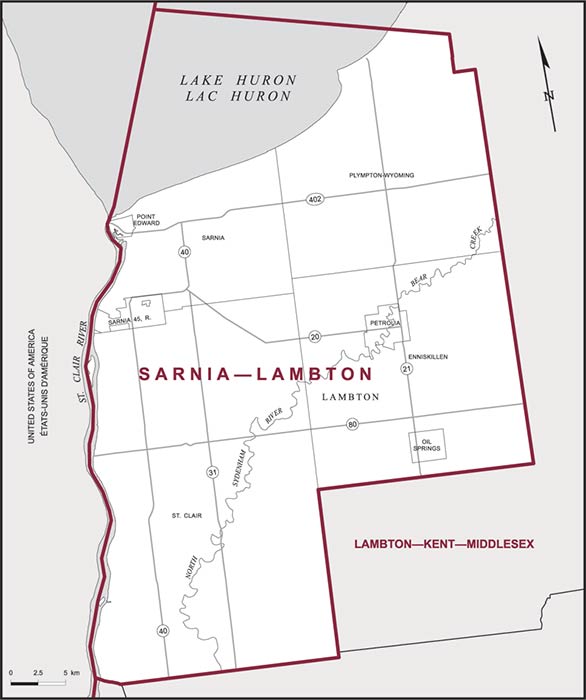 ABOUT THE ELECTORAL DISTRICT ASSOCIATION

The EDA has important tasks to perform such as:

We are very pleased our candidate Marilyn Gladu was elected Member of Parliament in the 2015 federal election, and while it is in our mandate to support and work closely with our local candidate or in this case M.P. The EDA does not actually work for the M.P. or candidate. Instead the EDA is a separate and distinct organization, which performs on behalf of the Conservative Party of Canada. The M.P. always maintains his own office, staff, and resources separate from that of the EDA to handle government matters.

The electoral district of Sarnia–Lambton (Ontario) has a population of 106,293 with 81,362 registered voters and 227 polling divisions.

Consisting of that part of the County of Lambton comprised of: the City of Sarnia; the towns of Petrolia and Plympton-Wyoming; the villages of Oil Springs and Point Edward; the townships of Enniskillen and St. Clair; Sarnia Indian Reserve No. 45.

At Confederation, what is essentially our riding, was called Lambton. In the first election on August 7th, 1867, Liberal Alexander Mackenzie, a contractor, defeated Conservative Alexander Vidal, a land surveyor, 1,999 votes to 1,311 votes.

From 1862 to 1966, the riding was called Lambton West. Since then, the boundaries and the name have changed somewhat, but the riding has remained the westerly part of Lambton County.

The boundaries of the riding were changed in 2003 to include: the City of Sarnia; the Towns of Petrolia and Plympton-Wyoming; the Villages of Oil Springs and Point Edward; the Townships of Enniskillen and St. Clair and Sarnia Indian Reserve No. 45. 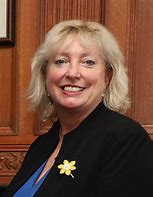 OTTAWA, ON—  MP Marilyn Gladu is a professional engineer by trade with a long career in the petrochemical industry before entering politics. She worked for Dow Chemical for 21 years in a variety of roles locally and globally. Marilyn then became Engineering Manager and subsequently the Director of Engineering at Suncor before taking a consultant role at Worley Parsons, managing large teams of various professionals for construction and engineering projects. She managed contracted capital engineering for Shell before becoming North American Business Director for petrochemicals and refining. She was recently named as a prestigious “Fellow” by the Canadian Academy of Engineers and Engineers Canada.

On Tuesday February 22, 2022 Marily Gladu our MP for Sarnia Lambton was appointed to the Shadow Cabinet for the International Trade and Supply Chains and will work proactively with sectors that effect our economy.  Her appointment was by Interim Leader Candice Bergen.

Marilyn has the ability to work with multiple levels of government, NGO’s, and industry associations to achieve good outcomes for our community and our country. She is focused on creating economic opportunities, standing up for seniors, and working with other community leaders on local priorities.

Recently, Marilyn because a Friesen Press Bestselling author for her book, Tales of the Globe Trot, a collection of experiences from a 32 year journey of a tall blond chemical engineer travelling alone

She takes great honour in representing Sarnia-Lambton and using her years of vast experience to ensure that both her community and the nation at large are both served as well as possible. She’s also the proud mom of two daughters. 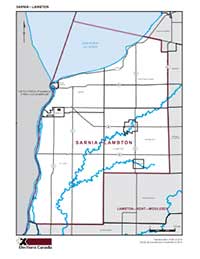 A year ago I launched a campaign for Prime Minister to put you back in control of your life in the freest country on earth.

He got caught, and with your help, we have forced him to pause his agenda.

LIVE: Liberals back down

You spoke up, Conservatives fought back, & Liberals were forced to withdraw their hunting rifle ban.